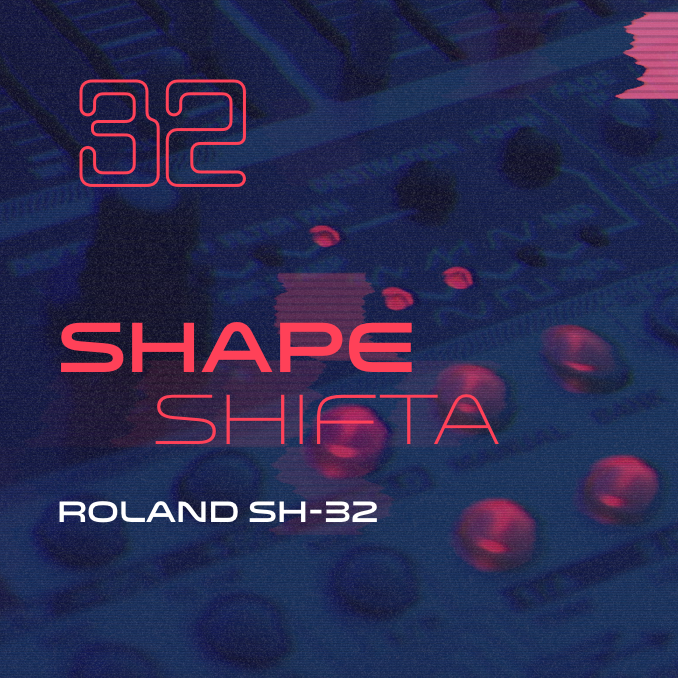 Open that cupboard and grab that box, blow the dust off and wipe the early naughties from your Roland SH-32’s brain. With Soundsauca’s SH-32 life extension plan you can inject some new sysex into this unappreciated little fella. Often maligned and misunderstood, the SH-32 is an experimental hybrid of a synthesizer. Sometimes it feels like a long lost cousin of the JV/XV and JP8k series, other times it spits out D-50 and JD-990 memories. However the SH-32 is it’s own thing and I had a blast getting to know it again.

With this sound set I set about exploring the Roland SH-32’s ability to create really dreamy textures with sounds like “Droid Choir” and “Crystal Pulsar”. The preset “Floral Haus” features colourful resonances with unique SH sheen. Whilst dual FX slots sprinkle fairy dust over “Fallen Angel” and “Rainbow Ice”. Massive analog strings abound with “Victory Horns” and “Nazel Hazel” force you to take this box seriously, but on the other hand “Spectra Strain” brings the box up to date with it’s pseudo side-chained vocals.

Along the journey my SH-32 revealed it’s darker more intense side. Thick Juno basses underpin lush ambiences. Slabs of concrete fire relentlessly at your eardrums, exploding with “Square Trash” and “Dirt Box 32″.  And my favourite, “Domin8rix” proves that Alpha Junos aren’t the one and only Dominators.

As you might guess, I love the character of the SH-32. It has bags of personality, an enticing blend of lo-fi goodness and tripped out sonic vocabulary. I hope you enjoy the Shapeshifta!

PS: The soundset is officially 64 sounds (Bank A) which are demonstrated in the YouTube video. But I did make a few more sounds… So there’s another 64 presets in Bank B (128 in total). I didn’t think all of them fitted in with the Shapeshifta vibe but I didn’t want to let them go to waste!

During my time with the SH-32 there’s a few technical aspects I wanted to highlight. It’s pretty easy to overload the synth output. The main reason for this is the filter. The SH filter is a double edged sword. It does have a very colourful resonance which if carefully programmed is really nice. The issue comes if the filter is swept – some pretty harsh distortion comes into play at certain settings. As a precaution, many of my presets intentionally have the level set lower than others. This may at first appear like I have forgotten to match the sound levels.

The reason for this is that some other presets, such as Domin8rix and Metareese rely on this gain structure to push the “dirty” nature of the synth. If these sounds were reduced, much of the aggressive character gets lost. I decided that it would be better to reduce the level for sounds that need it and to leave others louder. I hope this makes sense!

Another note is that the low boost setting needs to be set to off. By default it is turned on. This will overflow the bass end of things as the SH-32 has plenty of bass without using this. Instructions are included for turning it off.